The achievement habit : how to be successful by solving the right problem through reframing.

Bernard Roth is the co-founder and academic director of Stanford University’s d.school. He recently presented at Stanford’s eCorner a talk called: reframing problems and getting honest. I was so struck by the importance of the talk for entrepreneurs (and non-entrepreneurs) that I thought I should summarise the key points in a blog, but also publish the talk itself (see below). Read the summary if you like, but the video is definitely worth watching.

From an entrepreneurial perspective, we face problems and challenges practically everyday. Although

there seems to be a never-ending supply of support on the web or from experts, sometimes we need to step back from the technical aspects of the problem (especially if you are an engineer) and think about the problem itself. This is where this article will stand you in good stead – and why it should be essential entrepreneurial reading.
Roth starts by establishing credibility through an introduction to himself and giving a bit of his background. He then talks briefly about design thinking which although is all the buzz today, has actually been around for decades in one form or other; although it is now being applied in fields far beyond design, including acting as a problem solving methodology.

The heart of the talk is about problem solving and he challenges the Stanford (mostly engineering) crowd to answer the question: “If we are so bright, how come there are so many problems that worry us, appear unsolvable over time and may even keep us awake at night?”

His answer: “Because you are trying to solve the wrong problem!” The way to address this is then to reframe the problem by asking yourself: “What would it do for me if I solved the problem?”. He goes on to offer up some of his own examples, but let me offer one I have seen. This may be simplistic but it illustrates the method.

Entrepreneur: “I cannot get funding for my startup”

Mentor: “You can keep banging on VC doors or ask yourself the question: ‘what would it do for you if you solved the problem.’”

Entrepreneur: “I could hire a developer to build my product”

Mentor: “How else could you get this done if you have no funding?”

In this case and the one’s that Roth uses, by asking the question a far wider range of solution spaces opens up and suddenly there are plenty of other potential solutions available – not just the one with which you started. If you do not believe me, stop reading for a moment and give it a try with a problem you have been facing for some time.

He also makes the point that we get locked into this particular way of looking at a problem and often find it hard to let go – but often when we do manage to re-frame, the solution becomes obvious. He uses a familiar joke as a metaphor to our behaviours. A drunk is walking home, bumps into a tree and falls over. He gets up and bumps into the same tree and falls again, cursing the tree. He gets up ….. and so on. Eventually, he sits down on the floor and says: “I give up. They have got me surrounded!” Which is how Bernard claims we often act when worrying over and over about a problem we are not solving. We hit the same obstacle without trying to get around it.

The second key point is that we often use reasons as to why we do or do not do things. He says: “All reasons are bullshit.” There is never simply one reason, life is too complex but we hone in on one reason (even if it does feel logical) and that is what stops us changing behaviour. His example was that he was on a Board of a company and always arrived late. His rationale was that the traffic around San Francisco always held him up. After a while he had an epiphany and that was he did not give the Board meeting enough valence or respect. He allowed himself to be interrupted or left late. He realised that if he really cared enough, he could get there on time (and eventually did!). This holds true for many things. If you really care enough (either externally or internally motivated), you can do something – especially if you are prepared to re-frame the problem.

The third point is that “Yoda is wrong!”. Bernard says there is a try and there is a do – and both are OK states. The problem is when you confuse trying with doing.

He offers up a few useful examples such as when he and his wife stopped to see a concert. She was not really keen and there was a queue. He dropped her off to buy tickets but when he returned she was waiting around and said that they were all sold out. Bernard then went off and bought tickets (he 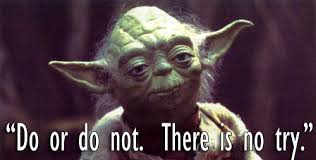 does not say how, but we assume he bought from some ticket holders or something like that). His point is his wife was trying when she thought she was doing. If you want to “do” you do not let obstacles get in the way. You go around them, over them or through them – whatever! You make it happen because that is your mind-set. Trying is attempting to do something but giving up if you do not succeed – and possibly not feeling too bad because at least you “tried”. He does not say that trying is wrong, but simply encourages us not to confuse trying with doing.

From an entrepreneurial perspective, we face problems and challenges practically everyday. Although there seems to be a never-ending supply of support on Google or YouTube, sometimes we need to step back from the technical aspects of the problem (especially if you are an engineer) and think about the problem itself. This is where Bernie’s teaching can come in useful.

Bernie has also written a book around the topic: The Achievement Habit: Stop wishing. Start doing. Take control of your life. It covers this topic and is full of other useful ways of living a successful life – click on the image to reach Amazon.

A final example may be if you are an entrepreneur starting a business, your problem may feel like: “I do not know how to go about launching a successful business.” That might be better framed as : “Where do I find the best resource to help me be successful in my new business?” Then the answer becomes obvious. Mashauri!

Have a look at our free programme to test us out!

The full e-Stanford video can be seen here:

Mashauri offers accelerators and training programmes for early stage entrepreneurs who want to learn how to conceive, launch and grow in the right way to maximise their potential to succeed. Why not give our free programme a test drive? Click on the image below and sign up now. 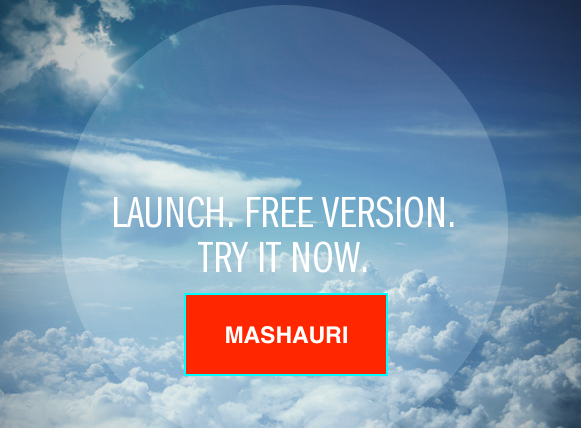